Provisioning is the cooking profession in Elder Scrolls Online. Provisioners can cook food and drinks which provide buffs that last anywhere between 30 minutes and 2 hours in ESO. As of Patch 1.0.4, it provisioning buffs persist through deaths just like Mundus Stone buffs. It’s unclear whether this is intended or not. You can only have one provisioning consumable buff active at a time.

This guide is still work-in-progress, but will serve as a source of general provisioning information for now. 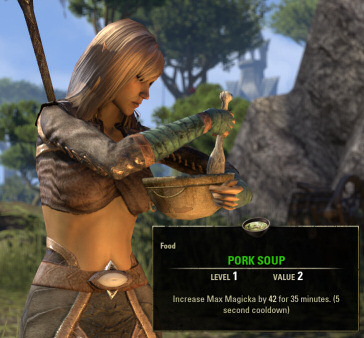 Provisioning recipes are found in containers such as dressers, nightstands, cabinets and trunks. They also drop as loot from enemies. The recipes you’re able to get from the containers depends on your character’s level and the alliance you’re playing in.

The best way to get provisioning recipes is finding a building with as many dressers, nightstands, cabinets and trunks as possible, and then looting it over and over again. Container loot is instanced, so you can log out and log in back to reset the containers.

Many provisioning recipes are Alliance specific. It means you can only get these recipes from the relevant Alliance zones. Many of the ingredients also only drop in specific alliance zones. You can, however, bank the recipes and then learn them on another character in a different alliance.

You can cook food and brew drinks. There’s three types of both.

The effects each type of food/drinks have isn’t this black and white, but is accurate for the low provisioning ranks. Later in the game you’ll be able to cook breads and pies which increase all Health, Stamina and Magicka instead of just Health, for example.

Provisioning Skill Line gives a number of bonuses to Provisioning. Some of these skills are vital in order to advance as a cook.

Recipe Quality allows the player to use higher quality recipes, which will naturally yield higher quality food and drinks. A casual provisioner will be fine without investing skill points in this passive, but if you want to get the most out of cooking, you’ll want to take a look at this skill.

Gourmand is an useful passive because it increases the duration of food buffs. It simply means you need to consume less food to maintain 100% uptime on your food buffs.

Connoisseur works just like Gourmand does, except it affects the duration of drink buffs instead of food.

Chef is a very nice passive skill to have for Provisioning. It creates up to three extra servings of any food recipe. Even if there is an abundance of food ingredients in ESO, this passive on its own means you need to find three times less ingredients to create the same amount of food than you would without it.

Brewer does to drinks what Chef passive does to food – it enables you to create up to three extra servings of drinks from a single drink recipe.

Hireling simply sends you food and drink ingredients every day. The value of this passive depends largely on how much time you have at your hands. The less time you can spend in game, the more valuable this passive becomes.