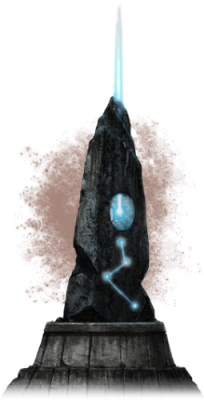 Remember Standing Stones from Skyrim? In Elder Scrolls Online, they are called Mundus Stones. The concept of Mundus Stones has always existed in The Elder Scrolls games, but the implementation has changed. In the earlier TES games, you were forced to choose a birthsign when creating your character. The birthsign gives a permanent buff or a spell to your character. It could be a fortify Magicka bonus or a spell to gain invisibility once a day for example. In ESO when activated, Mundus Stones grant Boons, which are permanent buffs that persist through death. You can change the Boon by activating a different Stone.

In Morrowind and in Oblivion you are forced to choose a Birthsign on character creation. It is in a way a significant decision, because you would be forever bound by it. Oblivion also has Birthsign Doomstones, which grant a Greater Power that is only useable once a day. Only one Birthsign Doomstone power can be held at a time.

The approach Skyrim, and now Elder Scrolls Online, took here is more lax. Strictly speaking there are no birthsigns, but instead you have Standing Stones or Mundus Stones, which can be activated whenever. The point here being that you are not bound by the decision – you can just use another stone to get another effect.

So to sum it up: you have thirteen different types of Mundus Stones in Tamriel, but there’s four of each Mundus Stone: one in every alliance territory and one in Cyrodiil. The only exception to this is The Lord mundus stone, which does not exist in Cyrodiil for some reason.

Mundus Stones open up a lot of possibilities for character customization in Elder Scrolls Online in the form of permanent, changeable buffs that complement your build and gear at any given time. It’s clear that Mundus Stones have a major role for maxing out your character and playing it to its full potential.

Changing the buff is simple, as long as you have done some exploring. You can freely travel from a wayshrine to another, but you cannot *fast travel* straight to a Mundus Stone. If you want to change your Mundus Stone buff, all you need to do is travel to the wayshrine that is closest to the desired Mundus Stone and make the rest of the journey on foot or on your mount.

The fact that every Mundus Stone (except The Lord stone) can be found in Cyrodiil is great, because it enables you to go and pick up the buff you want as soon as you can access Cyrodiil at level 10. It’s also a good thing for PvP focused players who may want to spend most of their time in AvA in Cyrodiil. Many of the alliance territory Mundus Stones are in higher level areas which are near-impossible, if not impossible, to access unless you are of appropriate level and have completed the right quest lines.

The distances in Cyrodiil are of course very big, and getting your desired Mundus Stone can be tricky and time-consuming.

So what do Birthsigns, Birthsign Stones, Standing Stones and Mundus Stones have in common? Their names all represent the star constellations of Tamriel. There is a book found in the aforementioned TES games called The Firmament. It talks about the the constellations:

The Evolution of Birthsigns in Elder Scrolls

Now that we understand that the names represent the star constellations, we can look at the birthsigns and how they have changed in The Elder Scrolls games. There’s a clear change overall: previously the birthsigns often granted spells, whilst in ESO Mundus Stones always grant a passive buff instead of an ability.

As we can see, some birthsign effects have drastically changed, others not so much. Birthsigns in Morrowind and Oblivion often have a similar theme with Skyrim’s Standing Stones, but Mundus Stones in The Elder Scrolls Online sometimes completely turn the effect around.

There’s a couple of questionable Mundus Stone effects in my opinion, let’s take The Atronach’s ‘increase Magicka regeneration’ for example.The Atronach birthsign’s effects in previous games are the exact opposite: they either reduce the magicka regeneration or completely stop it from happening the normal way. Instead, there’s a fortify Magicka buff in place and a spell absorption. Spell absorption was probably seen as over-the-top for an MMO, and Zenimax decided to do something different.

The Mage Mundus Stone in ESO actually has that fortify Magicka buff, which makes sense since the Mage birthsign in the previous games also fortifies Magicka. The Serpent effect is a bit disappointing really, if you look at the awesome paralyze and poison spells in the previous games. In ESO we get increased non-combat health regeneration. Nice (not really). The Shadow also changes drastically: previously you were given a spell to gain invisiblity, now your critical hit chance is increased instead.

Mundus Stones providing nothing but buffs is a pretty significant thing. In a way it’s a bit boring, because it would have been nice to have a variety of use-once-a-day type of spells to choose from like in previous Elder Scrolls games.