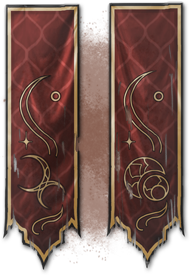 Khajiit are cat-like creatures, one of the beast races inhabiting Tamriel. Most of the Khajiit live in Elsweyr, right next to the home of Wood Elves, the Valenwood. Khajiit are infamous for their production of Moon Sugar, a vital ingredient of skooma. Khajiit often refer to themselves in third person and many of them travel around Tamriel selling their wares.

Make no mistake, on the field of battle Khajiit are fierce warriors known to wreak havoc at frontline. Some khajiit prefer to take a more indirect approach and use the shadows to hide them from unfriendly eyes.

Khajiit are capable of moving silently when needed – the Stealthy passive ability increases the stealth radius and damage done from stealth. Perhaps the most valuable racial skill the Khajiit possess is Carnage, which increases melee critical rating.

The increased health regeneration will be handy and the stealth bonuses give the khajiit the option to play a sneaky role very well. The increased crit rating for melee and increased critical damage is a very powerful bonus. If there is a way to stack up on critical rating and increase your critical multipliers through other means, focusing on these stats for Khajiits is a seriously tempting option.