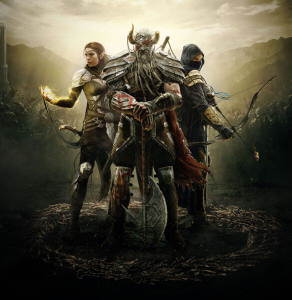 Unlike in most MMOs, in ESO choosing the class is not as big of a decision as you would think it is. That’s because in ESO your class does not really define your character. Of course it can, and for most players it will likely have a huge impact on the way they choose to progress and develop their character. But in The Elder Scrolls Online, the class abilities and skills represent only a very small portion of the total number of abilities available to each player.

By choosing a class, the player will gain access to a class-specific set of skills. In ESO these skill sets are called skill lines. Each class skill line gives the player the option to put skill points in five different active abilities and four passive abilities, plus an ultimate ability per skill line. The ultimate skills and active skill can be morphed. Morphs change the original skill in a specific way, giving you more options to customize your character and playstyle further. Each ultimate skill and active skill comes with two morph options. Once a skill has been morphed, it will replace the original skill.

Every class has three skill lines, all of which often have their own niche.

The Ardent Flame skill line has a fire theme, and the skill line focuses on fiery effects and abilities. In general the Ardent Flame skill line can be seen as the go-to damage dealer skill line, where as Draconic Power has a much tankier set of abilities. Most of the abilities are very defensive, so it is fair to say that choosing at least a couple of Draconic Power abilities should be a no-brainer for any dragonknight that wants to have a defensive build, be it in PvE or PvP. For me personally, the most interesting skill line out of the three dragonknight skill lines has to be the Earthen Heart. It focuses heavily on utility and control, both of which can be very beneficial in any scenario within the game. A player who enjoys playing the support role should feel right at home with the Earthen Heart skill line.

All in all, the classes in ESO can be seen as character templates. Because you can only ever slot ten abilities and two ultimate abilities on your quickslots, it’s very likely that you’ll only end up with a few class abilities. Then again, maybe you really like what your class abilities give to you as a player, and want to build on those rather than focusing on the other skill lines that are available in the game. Don’t forget that as your character progresses in the game, you will gain more skill points and with more skill points you can further specialize your character by choosing different active and passive abilities.

You are not bound by your class at all. If you wish to wield a destruction staff and wear heavy armor, you can do so. If the original picture you had in your mind about your character doesn’t suit you after some time, you can turn around and specialize on other stuff. Not digging those dual-wield axes? Why don’t you grab a bow and snipe instead.

Maybe you want to prepare for almost any situation and make sure you have a set of abilities that makes you the jack of all trades. Perhaps you want to be the offensive glass cannon that excels in dealing damage with ranged weapons from afar? In the end the choice is yours. And choices are something you will have.