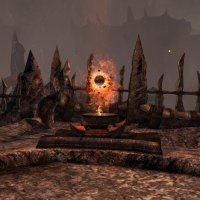 nimax’ latest news article gives us a sneak peek to the veteran content, also known as end-game content in ESO. Turns out Adventure Zones are NOT the raid equivalent large group PvE content we thought they would be – Trials are.

What’s great is that Trials will include leaderboards, providing groups an incentive to go back and destroy the time other Trial groups have set, and fight for the top spot on the ladder.

Adventure Zones or Trials won’t be in at launch, but Zenimax is aiming to include them in the first content update patch.

Adventure Zones are pretty much just like normal PvE zones, except they are tuned to four players instead of one. Craglorn has been confirmed to be the first adventure zone, and it will have its own story and quests. The dungeons or interior spaces in Craglorn are called ‘Delves’. Delves are instanced to your group, and they will always have a boss and a skyshard inside. I’m not sure how Delves differ from 4-man veteran dungeons, but that’s what Craglorn 4-man dungeons are called. I’m sure we’ll find out soon.

Other events we can expect in Craglorn:

Craglorn also offers entries to the Trials, which are confirmed to be the large group PvE content in ESO.

Trials are 12-man group instances. Trials are the closest thing to raids we’ll get in Elder Scrolls Online at this point.

You will only have a limited number of resurrections to use in the Trials. This is referred to as ‘Soul Reservoir’. If your group resurrects too many times, you have failed the trial.

Trials include a staging area where you group can take a look at the situation and plan ahead in order to rush through the enemies as quickly as possible. The staging area will no doubt prove useful, because Trials include leaderboards. That’s right – Trials will have some form of ladder. The aim is to complete the Trial as quickly as possible. Your group is competing against the clock, and mistakes, such as player deaths, will add a time penalty.

There is no mention about the rewards for claiming the top spots on the leaderboard. Do you think there will be any rewards? Titles, cosmetic gear? Pure prestige?