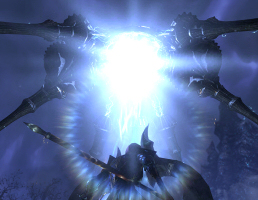 General Executioner is an achievement in Elder Scrolls Online that players need to complete in order to unlock the Daedric Red dye. It also yields the prestigious Daedric Lord Slayer title and 50 achievement points.

The achievement itself involves destroying all 16 of Molag Bal’s generals that appear at the Dark Anchors. This achievement requires some dedication, because there is no guaranteed way to make a specific Dark Anchor boss spawn.

Dark Anchors in a Nutshell

For those who aren’t familiar with Dark Anchors or Dolmens: they are gigantic devices of Molag Bal scattered around Tamriel. Molag Bal wants to suck Nirn into his plane of Oblivion, the Colhardbour. Unsurprisingly, us players will be destroying Molag Bal’s plans over and over again.

Each zone has three Dark Anchors. Dark Anchor events are triggered by entering the area. You’ll witness a ritual presented by Molag Bal’s cultist servants. Killing the cultists starts the event. Waves of Daedra will be thrown at you. After you’ve cleared the Daedra trash and it’s time for the Dolmen boss to spawn, you can hear Molag Bal speak. If he mentions something about “generals”, that’s your verbal cue to get excited, because a general will pop up. Defeating the boss mob & completing the events gives experience, ranks up your Fighters Guild skill line, and gives you access to a small chest of loot which appears by the Dolmen.

This is where the achievement comes in: there’s a small chance (approximately 10-15%) that the Dolmen boss is one of the 16 generals of Molag Bal. That’s what the General Executioner achievement is all about – we are after these 10-15% of Dolmen events.

Whether you’re going for the Daedric Lord Slayer title and/or the Daedric Red dye, you’ll be clearing quite a few Dark Anchors. Luck can be harsh sometimes, but eventually you will get there.

Stick to the Low Level Zones

Whilst it is random whether a General will spawn at a Dark Anchor or not, the location of each specific general is not random. No generals can spawn in the first major zone of any alliance: Auridon, Glenumbra and Stonefalls, but after that a specific set of four generals spawn in each different normal zone.

Note that ANY general can spawn in Veteran zones and Cyrodiil. For this reason, it’s advised that you stick to the level 18-45 zones listed below if you’re looking for specific generals. It doesn’t matter which specific Dark Anchor you’re going for as long as you’re in the correct zone.

The table below shows which zone’s Dark Anchors you’ll need to farm as each Alliance to have a chance for a specific general. For example, if you’re after The Torturers as an Aldmeri Dominion player, you should stay in Grahtwood. (AD stands for Aldmeri Dominion, DC for Daggerfall Covenant and EP for Ebonheart Pact)

Keep your eye on the prize & happy hunting!