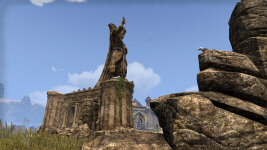 These are the latest ESO patch notes from the private test server. There’s a couple of big changes which are worth mentioning.

Anyone who took part in last weekend’s beta test will be pleased to know that Zenimax have found the cause of broken quest issues and are working to fix it.

The Elder Scrolls Online v0.182 features many fixes and improvements to existing content, and will be one of the last significant patches until launch. Here’s a brief overview of what awaits you in this test: Preparations and updates in Cyrodiil for Early Access and launch. Many fixes and improvements to quests, animations, and gameplay. Tweaked many issues relating to UI.

Please note that we found the underlying cause of the broken quest issues that showed up in last weekend’s beta test, and we’re currently working to fix them. To aid players who want to visit the former starter islands, we’ve made changes that more explicitly direct you to them, and the tutorial is getting a few final tweaks as well. These changes aren’t in today’s patch, but they’ll be on the PTS early next week.

In preparation for Early Access, we have changed the campaign reassignment and guest campaign assignment cooldown to 12 hours. In addition, we have also changed the cost to reassign your campaign any time from 100,000 AP to 15,000 AP. This change was done to help you find your campaign of choice, and play with your friends in our first month with ease and lesser burden on their Alliance point gains.