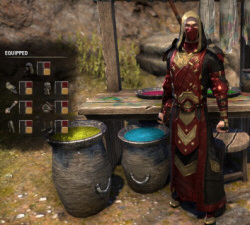 The latest The Road Ahead article published on the official ESO website reveals the planned release timeframe for game updates 2 & 3.

Game Update 2, featuring Veteran Crypt of Hearts, FOV Slider and more object interaction in Tamriel will be live on the week of June 23rd.

Game Update 3 will be going live some time in July. Update 3 will add more features to player customization. We can expect armour dyes, guild insignias and tabards to be included with Update 3.

The European Megaserver will be moved to a datacenter on European soil at some point during the summer as well.

Phasing issues are also being looked at, and players should feel a change to a better direction over the summer.

As mentioned in our previous article, Zenimax is looking at improving veteran content. The Road Ahead article mentions a couple of changes they are working on:

Soft caps & Itemization changes – New, harder to acquire gear with better stats & visuals will be added to the game. To make this possible, the stat soft caps and overcharge points will not be kicking in just as quickly as they are right now. This is a necessary change to set powerful items apart from the standard items and make them have an impact on the player.

More Points for veteran ranks – It’s unclear what this means. The plan is to “give players more points to spend when they hit a veteran rank”, allowing players to have more character development decisions past level 50. This could have something to do with handing out more skill or attribute points for veteran ranks, but I’m sure we’ll find out soon.

Group Dungeon Scaling – A group leader will be able to scale the group dungeon to his or her own level. This allows the group to go back to previous zones and complete a group dungeon without making it trivial in difficulty, but still gaining on-level rewards for doing so. This sounds like an interesting change.

Zenimax is working on balancing classes to bring them more inline with each other. The mentioned changes are tuning down Dragonknights’ survivability, whilst buffing Nightblades slightly.

No major changes will happen over a short period of time. Instead, small adjustment to the classes will be implemented until they are on the same level. I’m sure everyone who has played MMOs knows this is a process which never stops.