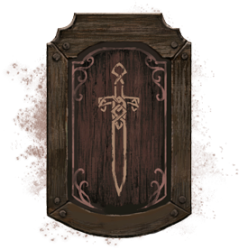 Fighters Guild has not taken sides in the raging Alliance War in Cyrodiil, and you will be able to join the faction regardless of your Alliance. The quests Fighters Guild offers to different alliances are nearly identical with each other. The environment will be different since each alliance has their own zones, but the npcs are the same across all alliances.

Fighters Guild have their own skill line in ESO, and anyone thinking of slaying Daedra or Undead will certainly want to take a look at the abilities offered by the guild.

The Fighters Guild skill line focuses on abilities which have powerful effects on Daedra and Undead. When facing Undead or Daedric monsters in Elder Scrolls Online, it’s a good idea to have a couple of Fighters Guild skills at hand, because they will surely be a massive help.

All active Fighters Guild skills cost Stamina as their resource, which means players can actually deal Magicka-based damaged and use helpful spells such as Circle of Protection to support their allies by using Stamina instead of Magicka. It complements many Magicka-heavy builds nicely, and should not be overlooked by mage purists.

You gain experience with Fighters Guild by…

It seems you also rank up with Fighters Guild by having one of the abilities on your quickslots, but levelling this way is much slower than it is for other skill lines for some reason.

Morphed from Circle of Protection

Morphed from Circle of Protection