Home » Why Potions are Extremely Powerful in ESO 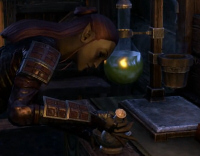 I think a lot of people underestimate just how useful potions and Alchemy can be in Elder Scrolls Online. Many Elder Scrolls players do know the potential of Alchemy from the previous TES games.

I’m one of the players who pretty much ignored alchemy altogether. I always looted potions and picked them up, but in the end found that I was only using them when shit hit the fan, if at all.

My short experience in ESO has totally changed my take on potions and alchemy. Alchemy might just be one of the most useful and possibly most profitable professions in Elder Scrolls Online. Here’s why.

Potion Cooldown & how to Reduce it

What’s different from previous Elder Scrolls games? In ESO, every potion has a 30-second shared cooldown. This may be a new concept to long-term Elder Scrolls fans, who are used to being able to drink a potion pretty much whenever they want.

Reportedly there are also gear sets which can reduce the cooldown of potions.

This is not all there is to potions, because you can also increase the effectiveness and the duration of a potion.

Potion Effectiveness & how to Increase it

There’s a limited number of ways to increase potion effectiveness, and some of them are locked behind race or class choice.

Argonians  can boost the effectiveness of potions by 15% with the Amphibious passive skill.

Nightblades  have a passive skill called Catalyst in Siphoning skill line which boosts potion effectiveness even further by 20%.

Another jewelry glyph, Glyph of Potion Boost can increase the effectiveness of potions. I’m not sure how much of a boost these will provide, but I have a feeling that Glyph of Potion Speed will be a better choice if you want to experiment with potion builds, but it all depends. If you have a high crit chance naturally, increasing the effectiveness of a 60% crit potion may be overkill and take you momentarily above 100%. In this case it’s better to just reduce the cooldown of the potion rather than increase its effectiveness.

There are also unique gear sets which can increase the effectiveness of potions.

Potion Duration & how to Increase it

There’s two ways to increase the duration of a potion’s effect: First is the Alchemy passive skill Medicinal Use, which increases the duration of potion effects by 30% when you invest three skill points on it.

The other way to increase potion duration is using three alchemy reagents with the same alchemy trait. If you combine three alchemy ingredients and each of them have the alchemy trait ‘Spell Crit’ for example, the duration of Spell Crit effect on the potion will increase to 14 seconds from the default 10 seconds. Note that if an anti trait, in this case ‘Lower Spell Crit’, is mixed in with those, one of the Spell Crit traits will be nullified and the duration will be the default 10 seconds.

Not all alchemy trait durations can be increased to 14 seconds. For example ‘Detection’ only exists in two reagents: Cornflower and Wormwood, and as such it’s impossible to reach the 14 seconds duration. You can also test yourself which traits can get the maximum 14-second duration with our Alchemy Simulator.

The table below shows the duration of potion effects when you measure in the Medicinal Use passive skill and the situation where three of the same alchemy traits exist on the same potion. You can also see how Glyphs of Potion Speed on your jewelry affect the potential uptime you could achieve with these potions.

As you can see, if you use three Glyphs of Potion Speed, you can have a 100% uptime with your potions, which is insane. Even in the worst case scenario you can potentially have a 33% uptime on potions, which is very decent.

A high-level Spell Crit potion, for example, gives you a flat 60% Spell Crit buff. Currently Crit does not have diminishing returns, so how much Crit you have without the potion is irrelevant. Even if the buff was half of the 60%, it would still be huge for a consumable which can have a 100% uptime.

Even if some of the data here is prone to be changed, or is not 100% accurate, you should see the bigger picture. Alchemy and potions can provide an incredible boost to your combat performance in ESO. I used Spell Crit as an example, but this applies to all types of potions. Whether it’s Magicka/Health/Stamina Regen you’re after or just pure Weapon / Spell Damage, you can get it with potions. There’s helpful potions which suit every role in the game: every player can benefit from potions.

Bottom line is that players who choose to use potions will have a significant advantage over those who do not.

This is the case in other MMOs as well, but in ESO it’s so much more visible. Low potion cooldowns (30 seconds default), combined with very powerful buffs (60% crit, hello!) and high uptime (worst case scenario 33%, up to 100%) means you’re really hurting yourself if you don’t use potions. Alchemy will most definitely be an useful and a very profitable profession in ESO.

The downside here, of course, is that if you use potions on cooldown, especially with the reduced cooldown enchants, you’ll burn through them like crazy, and it will cost a lot. You’ll probably want to burn through them in adventure zones and certain veteran dungeon challenges anyway.

You could go wild and build your character around Alchemy: An Argonian Nightblade with triple Potion Speed enchants and Medicinal Use passive from Alchemy. The downside of potion-focused builds is that it will limit your choices of jewelry enchants. You would miss out on important enchants such as Reduce Spell Cost and Magicka Regen, for example. Whether the increased potion uptime outweighs the other jewelry enchants highly depends on the situation, and in the end choosing other enchants will always be the easier choice for your economy.

I would not be surprised to see some funky alchemy builds in ESO, and I’ll definitely experiment with such a build myself.