Elden Hollow is the second 4-man group dungeon for the Aldmeri Dominion in Elder Scrolls Online. The dungeon is tuned to level 20-23 players in normal mode, and it’s located right next to Elden Root, the Wood Elf capital city in Grahtwood.

Daggerfall Covenant and Ebonheart Pact can run through the dungeon after they’ve completed their own level 20-23 dungeons, Wayrest Sewers or Darkshade Caverns.

The dungeon quest for Elden Hollow can be picked up as soon as you are teleported to the instance. I won’t spoil the story, but once again, you will receive a skill point for completing the quest.

Elden Hollow is filled with bandits, Alit and Spriggans.

Elden Hollow can be a pretty demanding instance for first timers. A healer is most definitely recommended, and having a tank will be highly beneficial to the group. 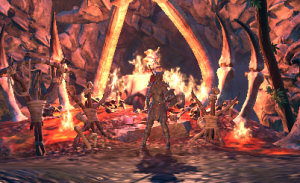 Akash gra-Mal is the first boss in Elden Hollow. She has no adds to worry about and the fight is pretty straight forward even though she does have a decent number of abilities.

Ancient Spriggan is an optional miniboss in Elden Hollow. There’s no reason not to kill her, but she’s pretty easy to miss. The fight is very simple and shouldn’t be a problem. 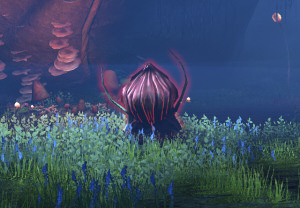 Chokethorn is a nasty stationary plant boss in Elden Hollow. This fight will test your group’s ability to move away from quickly expanding red circles of doom. The fight can take a long time because of Chokethorn’s high health pool and the fact that his adds heal him.

Nenesh gro-Mal is the fourth boss in Elden Hollow. He’s an optional miniboss and can be skipped if needed, though I don’t see why you would want to skip him. The fight can be pretty chaotic because of the large number of bandits surrounding him. The adds, especially the healers and casters, should be taken down asap before focusing on Nenesh.

Leafseether is a giant Alit miniboss in Elden Hollow who hits pretty hard.

Canonreave Oraneth is the final boss in Elden Hollow. This fight includes both unavoidable and avoidable damage, meaning a healer will be highly beneficial. You don’t necessarily need a tank for this – in fact you’re probably better off killing her from afar with ranged attacks.

Having a dispel ability and AOE crowd control will make the fight a lot easier.