Darkshade Caverns isn’t limited to Ebonheart Pact – the other alliances will gain access to them once they’ve completed their own level 20-23 group dungeons: Elden Hollow and Wayrest Sewers.

This guide explains the boss fights & mechanics of Darkshade Caverns in detail, without spoiling the story.

All 4-man group dungeons include a quest which drives the story forward and Darkshade Caverns is no exception. You’ll also receive a skill point for completing the quest, so it’s definitely worth doing.

You’ll run into lots of Kwama and dwarven spiders & centurions in Darkshade Caverns.

Darkshade Caverns is a pretty easy instance, but has at least one, maybe two fights which can catch groups by surprise.

Surprisingly there’s not much use for a tank in Darkshade Caverns. There is not a lot to block, which is the main reason you’d want to have a tank in the first place. A healer will be useful for The Hive Lord and perhaps Foreman Llothan as well.

Head Shepherd Neloren is the the first boss in Darkshade Caverns. She comes with a bunch of kwama adds which should be taken down quickly because of their charge ability.

Neloren has very little health and should not be a problem for any groups.

Llothan requires at least some level of attention because of his highly-damaging AOE attack. A lot of the damage in this fight is completely avoidable, though.

The Hive Lord is possibly the most damage intensive fight in Darkshade Caverns. Some of the damage is avoidable, but you’ll generally benefit from having a healer in this fight.

Cavern Patriarch is a giant netch and a miniboss in Darkshade Caverns. There’s very little to worry about – he is a complete pushover. 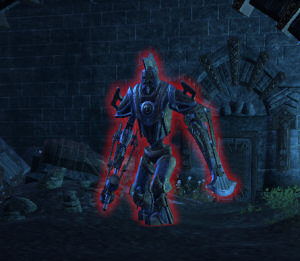 Sentinel of Rkugamz, a giant dwarven centurion is the final main boss of Darkshade Caverns. He has a couple of interesting mechanics, but doesn’t do too much damage. The fight requires lots of movement.

Cutting Sphere is a miniboss on your way out of the instance. He comes with a bunch of dwarven spider adds with him. There’s very little to worry about in this fight.