Tempest Island is the fourth 4-man group dungeon for the Aldmeri Dominion in Elder Scrolls Online, and is located in northern Malabal Tor. The bosses in the dungeon are level 37, and the normal mode of the dungeon is tuned to players between level 35 and 36.

The other alliances can complete Tempest Island dungeon after first running through their own level 35-36 dungeons: Volenfell and Direfrost Keep.

This guide explains the boss fights of Tempest Island in detail, and provides strategies for defeating the bosses.

Tempest Island is a unique dungeon with its own quest line, which also gives a skill point for completion.

Tempest Island has a lightning theme to it: many of the bosses have shock/lightning attacks. The dungeon is filled with bandits and lamia.

The last few boss encounters in Tempest Island pretty much require a dedicated healer. At the very least it will make your life a lot easier. Many of the bosses have heavy melee attacks, so having a tank block these is also a plus.

Sonolia the Matriarch is the first miniboss in Tempest Island. She pulls with a couple of adds who need to be taken down first. That’s where the little difficulty this fight has comes from.

Apart from that, Sonolia shouldn’t be a problem for any group. 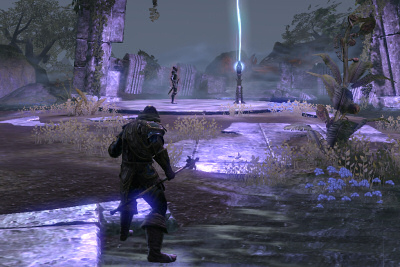 Valaran Stormcaller is the second boss in Tempest Island. Valaran can be annoying from a tank’s perspective because there’s no real response to taunts.

Yalorasse the Speaker is the third boss in Tempest Island. She is a miniboss, and shouldn’t be that difficult.

Yalorasse is surrounded by a bunch of adds who should be cleared asap.

Stormfist is the fourth boss in Tempest Island. He’s a giant Storm Atronach, and is one of the more difficult bosses in the dungeon.

Commodore Ohmamil is the fifth boss in Tempest Island. He is a miniboss and is the easiest encounter in the dungeon.

The only thing making this fight hard at all are the adds around him. There’s lots of them, and they deal a lot more damage than the boss does. Needless to say, kill them first.

Stormreeve Neidir is the sixth and final boss in Tempest Island. Neidir is a lightning mage and can be difficult to tank, because she likes to shoot lightning at random targets.