Direfrost Keep is the fourth 4-man group dungeon for the Ebonheart Pact in Elder Scrolls Online, and is located in southeastern Eastmarch. The bosses in the dungeon are level 37, and the normal mode of the dungeon is tuned to players between level 35 and 36.

The other alliances can get inVolenfell  after first completing their own level 35-36 dungeons: Tempest Island and Volenfell.

This guide explains the boss fights of Direfrost Keep in detail, and provides strategies for defeating the bosses.

Direfrost Keep is an old Nordic keep with various different beasts and draugr. If you ever played Skyrim, you should feel right at home in this dungeon.

Direfrost Keep has its own story which is driven by a quest. Completing the quest rewards the player with a skill point. 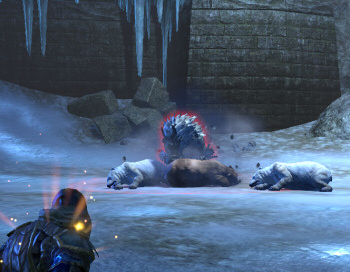 Teethnasher the Frostbound is the first miniboss in Direfrost Keep. Even though the frost troll only has 14k Health and is a miniboss, he’s the most lethal boss in the entire dungeon, especially if you don’t know how to deal with him.

Guardian of the Flame

Guardian of the Flame is the second boss in Direfrost Keep. He’s very tame comparing to Teethnasher.

Drodda’s Dreadlord is the third boss in Direfrost Keep. He’s a miniboss and doesn’t have many abilities. However, the frigid banekin are what makes this fight interesting.

Drodda’s Dreadlord is surrounded by three frigid banekin. They’ll run after random targets and explode for massive AOE damage. Two of them will most likely kill you. If you make sure none of these reach the group, this fight is very easy. 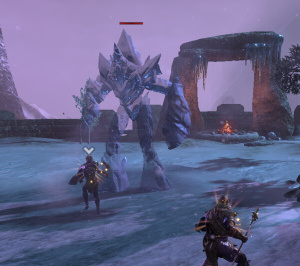 Iceheart is the fourth boss in Direfrost Keep. He’s a giant frost atronach, and is very annoying if you’re a melee player.

Drodda of Icereach is the fifth and final boss in Direfrost Keep. She’s a frost mage and can’t be tanked efficiently.